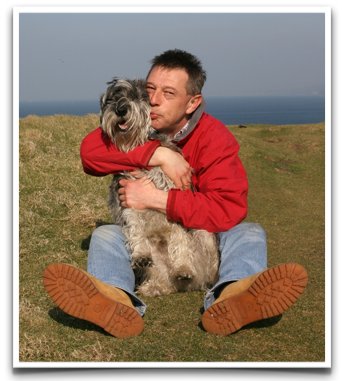 Rochdale, where he was born in 1959, triggered in Andy a curiosity he has never lost. Musically, his horizons were opened up by an early obsession with Bob Dylan. Tracing Dylan’s influences led Andy towards folk, blues, country, soul and gospel.
He went to Leeds University, partly to study politics in the half-hope of becoming a journalist, but chiefly because the student union at Leeds put on the biggest college concerts in the country.

In his second year he seized power of the job of Entertainments Secretary in a bloodless coup and ran the concerts for two and a half years. His line-ups were a who’s-who of early 80s music – concerts by The Clash, Elvis Costello and Black Uhuru, among others, were regular occurences. Naturally, he failed his degree.

Andy came to London in 1984 to work as Billy Bragg’s driver and roadie. It was while he was chaperoning Billy to BBC2’s “Whistle Test” that he was spotted by a producer as a potential new presenter. He began his broadcasting career in September 1984 with a baptism by fire – a report for Whistle Test from the Monsters of Rock heavy metal festival.

In 1985, Andy was invited by Radio 1 to present his own show with a free choice of music. As his own tastes evolved so did the content of the radio show. Meeting the musicologist and Radio 3 presenter Lucy Duran – now an old friend – and the first appearance of Zimbabwe’s Bhundu Boys in the UK tipped Andy heavily into African music.

Andy presented his Radio 1 show for 15 years until he was sacked in May 2000 to be replaced by another dance music programme. He realised Radio 3 was his spiritual new home when Controller Roger Wright told him that what he liked about Andy’s Radio 1 programme was that he never knew what was coming next. He joined Radio 3 in April 2001 and continued to ignore categories and mix it all up.

In his spare time Andy enjoys motorcyles (particularly racing) and travels to extreme countries. He has thrice holidayed in North Korea and, for Channel 4, made the very first film inside the secretive country.

A journalist at heart, he has often reinvented himself as a foreign correspondent for BBC radio news and occasionally made travel documentaries for Channel 4. He reported for the BBC from the midst of a volcanic eruption in Montserrat, where he had taken his partner for “a quiet Caribbean holiday” (the island blew up the day after they arrived) and, most memorably, from Rwanda during the horrors of 1994.